Right now I’m reading a great book on consciousness that was sent to me by my Texan friends, I think it was specifically Julia though I can’t be sure, the list of who sent what is buried deep in my bookcase. The book is not exactly recent, but good: Merlin Donald‘s A Mind So Rare (see a review here, and another here, and one last, slightly more critical, one here). In it Donald sets out to debunk some of the kinds of consciousnessn theorizing that’ve been advanced by people like Dennet (see a recent interview with old Dennet here) and his ilk.

I don’t know why I took up this book instead of returning to Don Quixote as I had intended. Maybe it was the need to read another nonfiction book, something I’ve felt since getting back from India… I almost started in on a book on string theory and theories of everything but then backed off, realizing I’d long ago started the Donald book. Maybe it’s seeing the cover of Lime’s study book so often that made me want to read more about the brain and the human mind: 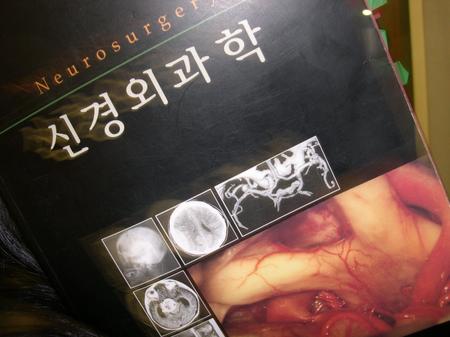 Or maybe it was the realization that something absolutely astounding was going on right before me and I couldn’t really explain it at all.

The first meal I had after breaking my finger was alone. I had no idea I’d broken it, and made no real adjustment to how I ate. Even after I knew the truth, but before I got a splint, I ate once more, and used my chopsticks in the same way as usual. But once the splint was in place, that became impossible.

The amazing thing, however, was that the very first meal afterward, I had adjusted to it. I was a little clumsy, as I am sure Myoung Jae would agree. We ate some udong soup on the way back to Jeonju.

But every meal after that I’ve used chopsticks and had very little trouble with them. I’d say I’ve enjoyed a 85-90% success rate for attempts at using chopsticks without my middle finger, as comparable to my usual 99% success rate. (Which is about as good as any Korean who grew up using the things, and better than some I know personally.) What’s amazing about this is that the middle finger is a very important one for standard chopstick use. It’s the finger I use to manipulate the bottom stick, the one that moves the most, and that job is not only delicate by also, if you think about it, mathematically very complex and spatially very precise.

And in the space of one meal’s practice, the angles have all be modified and adjusted for to allow my ring and pinky fingers to do the job, working under a splint, using the index finger as a kind of guide. Not only as the function of the first two fingers been mapped to the next two, but the function of the first has been significantly altered. All of these compensations seem to have been worked out “under the hood” and “during downtime” because it became a fairly natural operation by my second or perhaps third meal under these conditions. And this, it turns out, is far easier than simply learning to eat using chopsticks with my left hand. One of my friends didn’t even process that I was doing this, and only realized with some shock that I’d managed to learmn how to do it so very quickly when we had dinner on Friday. Similarly, Lime keeps teasing me about giving her the finger when we eat together, and when I tried to get her to attempt this kind of chopstick manipulation, she found it quite difficult; but I bet if her finger was immobilized, as an experiment, she’d manage the feat as easily as I did, or perhaps, given her longer history of chopstick use, even more easily.

(That may be erroneous. It’s possible that long use renders the standard pattern of use-habit more die-hard, whereas my more recent acquisition of the skill might mean more potential flexibility. It’s difficult to say without real experimentation. I don’t know if anyone would want to try this.)

Similarly, I am typing this post at about 80% of my regular typing speed, but with most of my right hand (with the exception of the index finger) rendered useless for the task.

How is it that the brain can map all of these functions so that such deft adjustments can be made? It’s one thing to learn to calculate how to throw a spear, and then learn to take the wind into account. But in a case of very fine tool-manipulation, I am very surprised that the technique was transferred over to new fingers not only so rapidly but so effectively. (This suggests a hell of a lot of mathematical mapping-out of spatial-relations and angles that I could never hope to do in my conscious mind.)

I am sure someone could do a really interesting study here, comparing various factors and looking for correlations in the ease of translating chopstick use facility to new fingers; maybe history with chopstick manipulation, sex, age, hand size, motivation, and other factors would matter more, or less, than we might imagine. It might be that with a modicum of motivation, anyone could do this. Or it may be I’m a chopstick savant.

Believe it or not, I actually think I wanna try this experiment. Hmmm. But I can’t imagine others wanting to play along. Hmmmm. Maybe I’ll suggest it to the next neurology student I meet.

That’ll be a long wait. But maybe someone I know might know someone.