My friend Marvin has posted his review of the film V for Vendetta (with spoilers, be warned). In his review, Marvin complains that

Now, I haven’t seen it, yet, as I’ve been too busy, but I’ve been seeing V for Vendetta posters all over the place here. (Actually, over here in Korea, “Bwee po Bwendettuh” — the fact that there’s no V in Korean makes the title funny on a few levels, but someone very cleverly redesigned the V to include the ㅂ(bi-eup) character on at least one of the posters I’ve seen, which matches the way people pronounce V as Bwee here in Korea.)

The thing is, like many very interesting comic books, V for Vendetta has never been translated into Korean… or, so claims one of my students. Maus, you can get in Korean. Superman, yes. But The Watchmen, he said, no. Hellboy, no. V for Vendetta, no. And yet these movies enjoy major theatrical release here. Okay, they also flop in a week because nobody gets it about them, and nobody’s really interested in this stuff.

What’s weird is that enough people still keep showing up at these films that they keep getting theatrical release. I remember seeing the faces of people at the end of Star Wars III: The Phantom Muckup. They weren’t just kickign themselves for wasting cash on that crap, like me: they were perplexed. “Here we are at the end of a trilogy, and the child-hero has just become an evil asthmatic monster. WTF?” 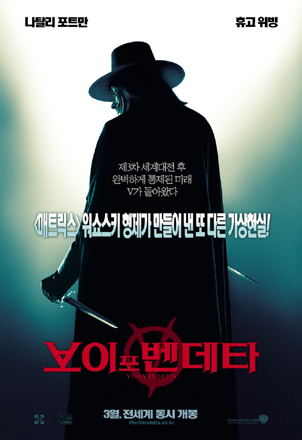 Yes, plenty of people watched the new Star Wars trilogy in complete ignorance of the original Trilogy. I can honestly say I’ve seen the original trilogy for rent exactly once here, and out for purchase exactly once as well. Yet Star Wars films, they were in the theater a LONG time here. People went. They went in droves, even though for the majority of them, the very thinly drawn characters and all didn’t even have the little bit of weight lent by memory of the first trilogy (as it did for most Western viewers).

So I have to wonder if Hollywood is underestimating its audiences, or estimating them quite well. I have this weird feeling that people are, in general, very happy to go to films that cut out the thinking bits of the books they’re based on and replace them with kung-fu. I have a feeling it’s exactly what a lot of people want.

And I have a feeling V himself would be quite anxious about this state of affairs, too. Anyway, I have to see the movie sometime soon; but more urgently, I need to get to class. Off I go!
(UPDATE 24 March 2006): Poking around at the schedules section of CGV Korea’s website, I noticed I’d gotten the Koreanization of the title wrong. Apparently when you Koreanize the letter V, it’s Bwee, but when you Koreanize a word beginning with the sound v, you can just turn it into a B-sound. Actually, this is how people with strong accents pronounce English, so I should perhaps have known it; when I saw it, it made sense. But I forgot about that until now.

By the way, I found a copy of that image I mentioned, the remodeled V into a ㅂ… actually, it’s a 브, and I think it’s quite cleverly done.