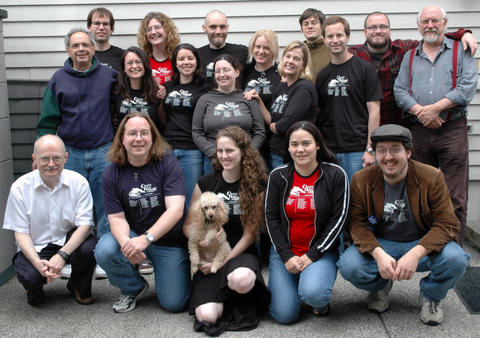 Week 6 was a little different. I felt odd, because I had no project-on-the-go. Prior to week 6, I’d planned on working on a new story throughout week 6, but once the last week arrived, and I looked back on what I had already written, I decided I’d done enough, and that it would be all I could do to produce crits and read others’ work and not get sick.

Well, I got sick anyway, but it’s cleared up now. I saw a baseball game, as well, with a number of classmates (and stepped on a piece of glass that pierced my shoe and necessitated a tetanus shot, even, fun fun fun).

So what I’m trying to convey is that Week 6 started out with a bunch of people who seemed to feel as I did: tired, worn-down, ready to go home to families and lovers and proper sleep and familiarity. Much as we were still enjoying one another, much as the friendships we’d built up by then mattered to us, much as we were reluctant to leave, a number of people were also beginning to feel quite ready to go home. Handing in one’s last story, as I did on the Sunday night, that only contributed to the feeling.

But one mitigating factor was Vernor Vinge. Vernor got us, and he didn’t let go. I remember someone writing on their blog about the “boundless enthusiasm for everything we were doing”, and really, that’s a good description. The man could start in on a topic at random and riff on it fascinatingly for hours. Even if you disagreed, he had a way of interesting you in what he had to say just the same. Frighteningly smart, Vinge. Someone commented that during a conference with him, she’d mentioned something he’d nto heard of, and she was surprised as he’d seemed to know about everything.

Vinge’s crits in class were astute, clear, and very thoughtful, but what really got me was his conferences. I had a conference with him on the Tuesday, which is the Readings night, and the man sat and talked with me for 90 minutes! He spent 30 minutes on each of two very long stories he’d read for the meeting, and then discussed how to get readers to do the heavy-lifting and depict plausible SFnal worlds when oneself is not an apt scientist for the remainder of the time.

One of the very useful ideas I got from him was what I call “analogy mapping”. He pointed out how in one story, I’d gestured at a parallel between two specific technologies, and asked why I hadn’t explored that parallel more, let it inform the specifics of the story in various ways, and then, impromptu, without apparent rehearsal, proceeded to suggest ways in which the analogy could be mapped across fruitfully.

Vernor was encouraging, funny, and quite endearing, and that last week, it was territory that was familiar to me, but familiar in the way that places look when you’ve traveled on and learned a lot and come home and see them in a new light.

Which is great, because in my books, it means that each of the instructors at Clarion West 2006 was outstanding in his or her own individual way. Each one of them brought different things to the table — as well as a few things that were brought to the table multiple times. I could see improvement in my writing, though I’m sure many lessons will take more time to sink in that just the six weeks. But I don’t feel like, other than redundancies that are part of my drafting issues, I was being told the same thing every week, and that’s great.

Links for those curious about the instructors, some thieved from Splinister’s wrap-up post:

(I wasn’t surprised that Paul Park doesn’t have a webpage, but that Vernor doesn’t is a big surprise. Ah well.)

So there are a few more people to comment about. Leslie and Neile, Neile and Leslie, they rock. I don’t know where they get their energy or organizational skills, but they have got the Clarion West workshop running like a well-oiled machine. It’s really outstanding work they do, and they ought to be commended and thanked every chance one gets. I plan on supporting Clarion West however I can in the future, as well as supporting the Susan C. Petrey Scholarship fund, which scholarship helped me get across the damnable sea.

One thing I’m thinking of doing is making a couple of little banners like the Clarion East one I saw on Cory Doctorow’s site, to be redistributed to the Clarion Westies and anyone else interested. I don’t know why there should only be a banner for East, linking to East, when I personally hold Clarion West in such esteem. Perhaps Neile and Leslie could find a use for such a banner, and redistribute it to other Westie alumni besides my classmates? We’ll see… I have to make the thing first, and that will have to wait till I’m in Korea.

Oh yeah, and while I’m online and have the chance to whine… I miss Lime.