It’s been a day of photographs. After I took a picture of my desk for a banner on another webpage I am currently designing, I copied a few more photos from my camera to my PC. I realized it’s been a long time since I’d done so, and some of the pics were really cool. I also got some pics in the mail over the last couple of days, and so for me, it’s been one of those days when photographs have afforded me a lot of happiness. Here are a few of them:

Check Out The Hair 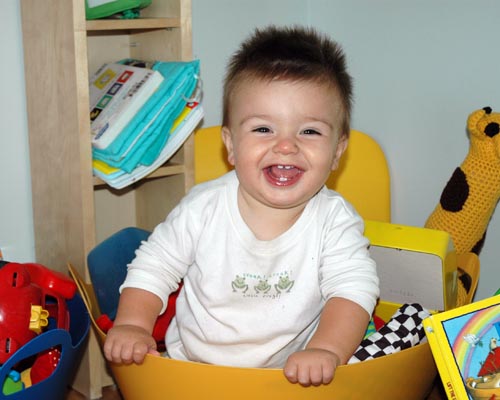 This is my nephew, Nathaniel. Nephew is said, “Choka” in Korean, but if you say it a little slower it sounds like the word for a man’s genitalia. One of my co-workers–yeah, it was Shawn–kept saying it too slowly a couple of weeks ago when teaching the “Family” Unit to his classes, and everyone was busting a gut as he said, “Penis! Penis!” to his class. But my students have seen a picture of this little guy, and so they know what I mean when I say nephew.

Check out the hair! I was under the mistaken impression that this standing-up-ness was a trait of what my friend Myoung Jae calls “Amazing Asian Hair”, but it’s obviously not. It’s Nathaniel’s Daddy’s birthday and they’ll be celebrating with my dad, who’ll be celebrating his birthday from a few weeks back. (He hasn’t had a chance, been too busy. Have I mentioned he volunteers at the Red Cross, now that he’s retired? I’m proud of him.) Sounds like fun. I’d love a chance to play with him on my birthday. Maybe someday. So many missed birthdays, and I’ve been out of my tree with stress and responsibilities that I haven’t called. 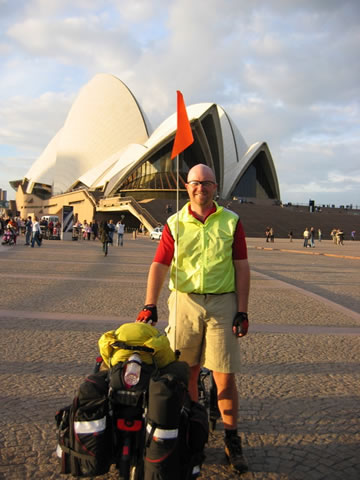 I was beginning to wonder what had happened to Charlie in a more serious, vaguely worried kind of way. Maybe some weird Australian animal had eaten him, I thought. But it turns out he’s doing just fine on his mad cycling trek all the way along the outer coast of Australia. He sent me a few pictures and when I saw them, it hit me how much I miss chatting with him.

When Lime and I went to Gosan Park for Chuseok, we ended up going on a walk out in nature. You know how it is in Korea, if you read this or any other site at all regularly: cars, noise, noise, cars, crowding… and we escaped all of that. It was quiet, calm, and mostly empty. At night, we could hear bugs and wind and even rain on the roof of the little cottage we rented, and in the day, during our wandering, Lime happened upon this little fellow perched quietly in a tree right beside the road: 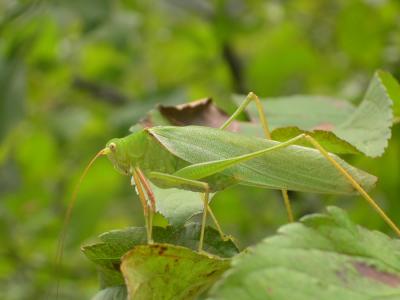 (Sorry it’s not a popup link, but I don’t have any scripts for that sort of thing enabled, and I’m not quite so 1337 a h4x0r as to be able to code it myself. If you click on the picture, it’ll open in the current window and you’ll have have to go Back to reach this page again.)

Now, normally I hate bugs, but this little guy, he was so calm, so still on his leaf, so patient and unfraid as we took our pictures of him–and we took many. Finally, he decided it was time to move along, and hopped down and across the road, and I felt a little silly at our reaction: he sat so still for us as we poked lenses closer and closer to him, but when he decided to make his own move, we both jumped back, startled.

But anyway, back to what he makes me think of: look at him! He looked so much like the leaves he was perched among that often when we looked through our cameras’ viewfinders, we couldn’t even make him out at all. But there he was, perfectly camouflaged.

And looking at the picture now, it just kills me that anyone could deny evolution. I know what they’re thinking: that some god up in heaven must have directly formed the bug to look like the leaves, and that it could never have reached this form through evolution alone. You know what that is? It’s just a failure of the imagination; it’s a giving in to the death-fear so profoundly that one doesn’t even allow common sense to weigh in on the basics of the world.

For the profound truth is that evolution is the most elegant explanation available; even if one mixes with with some kind of sense that, say, a deity designated evolution as a process, which I suppose is as unobjectionable to me as it is unnecessary, it remains the most sensible, realistic, and mysterious solution. Yes, evolution is mysterious… not in the sense that it depends wholly on unseen or incomprehensible forces–for those forces are quite comprehensible and we’re getting a better handle on them all the time. But it is mysterious because it simply short-circuits the human mind to try imagine this process in motion, leading to the bug looking so much like a lead that you mistake it for one, and leading–just as mysteriously–to the form of your own body and mind.

No other explanation can compete in terms of sacral revelation, in terms of beauty, in terms of mysteriousness and wonder. And it makes me happy to be slapped in the face with that truth, once again, on the side of a country road in Jeolla-buk-do.

(By the way… that is a grasshopper, isn’t it? The thing is, I’ve seen ones that don’t look like leaves on a tree, before, so I’m not sure.)

2 thoughts on “A Photo-Laden Day”