So I spent the afternoon blundering away at my computer, trying to figure out why I couldn’t get the client for the EVE MMORPG running. I guess, in the end, it was a video driver issue, which is weird since I had the newest driver installed. But anyway, once I finally got it going, I found myself spellbound.

Now, I’m one of the guys in the office who sits there shaking his head when people get into deep conversations about strategy for what I consider cheesy online military strategy games. When I hear the clarion call of cheap-sounding fake trumpets announcing simulated medieval warfare, I roll my eyes. 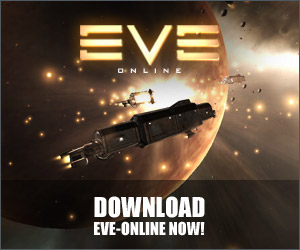 But because of this game, I realize that at least part of it is snobbery. Eve Online is not really Space Opera. Space Opera is all adventure and wonder and wow. This game has tons of wonder and wow, but it also has tons of grunt work and crappy jobs, which are still, nonetheless fascinating. The training just to learn how to play lasts for a couple of hours, and that’s just the beginner’s training! And yet, there is something about going out there with only a little training and mining asteroids, bringing them back to sell off the refined minerals, buying things to make one’s ship fly better, and fighting off pirates all the way… there’s something very engaging about that. Maybe it’s just the metaphors—and the lovely graphics—that sway me, because were it set on sailing ships in the 1700s, I’d have less than thirty seconds to spend on the game. But if you look at the big versions of the Screenshots on the main page (linked above), they’re pretty mindblowing. Very, very atmospheric. And the trailer is simply magnificent; like an animated SF movie, but one you’ll be able to play around within. And this thing is over 2 years old! More, even!

Oh, but the graphics are wonderful. The setting is gritty, dark, and funky. The tech is thought out quite well. Now, I ended up looking through the help forums for a long time, trying to figure out how to get the client running on my home PC, and I did notice one thing that made me a little hesitant to think about trying this game out for the longer term; it seems that the servers they run it on keep getting restarted, the MMORPG company doesn’t offer a lot of customer help service/support, and a lot of players with access problems are giving up and moving on. But for me, this game is exactly the kind of MMORPG game I would likely get into, if I weren’t always busy with ten or twelve other projects and looking for ways to spend time away from a computer. But I do think that this is the kind of game that our kids will be playing even more interactively; that our grandkids will be playing immersively, and quite possibly as part of their educational process. Structured the right way, a vastly expanded version of something like this certainly could be an educational engine.

And of all the jobs in the world, writing for one of those companies would be endless bloody fun, wouldn’t it?

Anyway, I don’t know whether I’ll be fighting to get a credit card so I can sign up… probably not, since I have so much writing I want to do, and so much exercise to do when I’m not at the writing. But this game tempts me, and I am going to enjoy the rest of my 14-day trial period.